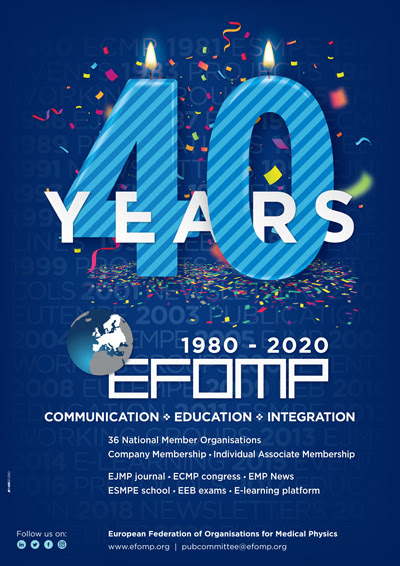 2020 marks the 40th anniversary of the foundation of EFOMP!

The draft constitution of the proposed Federation was circulated to all interested national organisations and at a meeting held in London, from 7th-9th May 1980, the constitution was formally accepted by delegates representing the medical physics organisations of fourteen countries, which thus became the founder members of the Federation.

In his inaugural article in the very first issue of European Medical Physics News, EFOMP’s first President, John S. Clifton, wrote: “The success of the Federation and its ability to represent and advance the profession of medical physics throughout Europe will depend entirely on the effort that both national organisations and individuals are prepared to make. The simple candle has a unique symbolism in civilisation, its flame representing simultaneously enlightenment, warmth and friendship and faith. The photograph below [shown in the article] shows Professor J.S. Orr in the act of lighting what will surely be known in future as the EFOMP candle, a decision which we all believe to be a significant step in the development of the profession of medical physics throughout Europe”.

Indeed, the symbolic act of lighting the candle marked the formal inauguration of EFOMP, which has continued to grow in its membership, remit and influence in the intervening four decades.

Throughout the year we will be celebrating with online events and articles. The first “EFOMP@40” events are a Birthday Cake competition and a Lockdown Webinar, “Implementing a system for automated, remote quality assurance in CT, Radiography and Mammography”, the latter in association with IOMP’s International Medical Physics Week.

The President of EFOMP Marco Brambilla and the EFOMP board.

The information in this email is confidential and is intended solely for the addressee(s). If you have received this transmission in error, and you are not an intended recipient, be aware that any disclosure, copying, distribution or use of this transmission or its contents is prohibited. Furthermore, you are kindly requested to send us back the original message at the address webmaster@efomp.org, and delete the message from your system immediately. Internet communications are not secure and therefore the EFOMP does not accept legal responsibility for the contents of this message and for any damage whatsoever that is caused by viruses being passed.

EFOMP respects your privacy and does not disclose, rent or sell your personal information to any non-affiliated third parties without your consent, except as may be stated in the EFOMP online Privacy Policy.